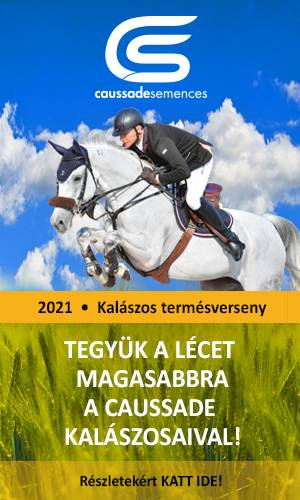 BKT trade show appearance at SIMA 2017: The most amazing and breathtaking ever

On the occasion of this two-yearly event for agricultural machinery BKT presented a world’s first: the brand-new Agrimax V-Flecto, displayed on a transparent plexiglass tractor at the BKT booth. Iya Traoré, the outstanding football acrobat brought the show to life with his spectacular football freestyle performance. 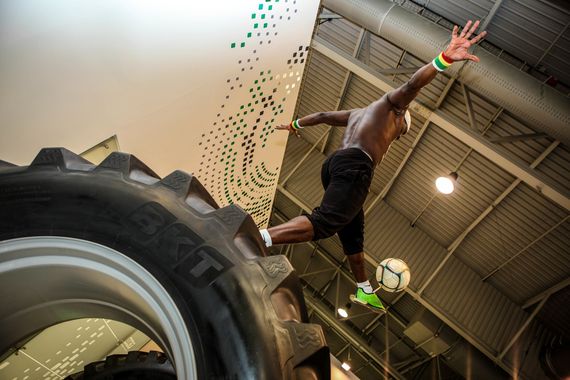 The largest stand ever, a transparent full-size tractor made of Plexiglas, the launch of a new tire as global premiere, an extraordinary footballer and freestyle magician, more than 17,000 footballs for free. In a nutshell, these were the strengths of BKT’s tradeshow performance at SIMA 2017. This year, the company amazed visitors with a record booth for both dimensions and originality, and with the performance of a footballer and Guinness Book record holder.

The fancy idea of displaying the brand new Agrimax V-Flecto fitted on a transparent tractor made of Plexiglas has been conceived in order to focus the attention on this global novelty by BKT starring in the lead role at the large stand at SIMA 2017. 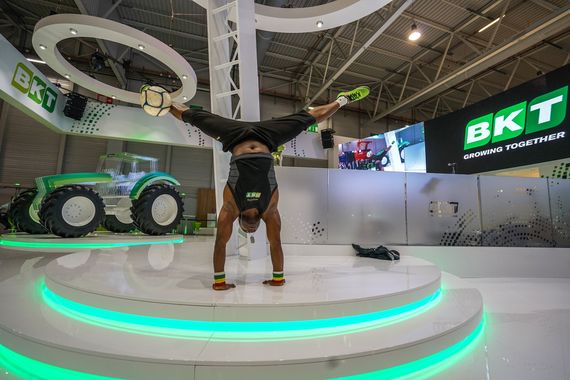 Agrimax V-Flecto is another plus that adds to the extensive BKT Agrimax tire lineup for tractors that is becoming always more complete and more technological, and already counts a series of real champions: Agrimax Force for high-powered tractors (over 250 HP), which offers major load capacity at lower inflation pressures compared to a standard tire of the same size, scores in terms of speed (up to 65 km/h) without changing the inflation pressure) and in the fields (reduced soil compaction); Agrimax Fortis for high-powered 4WD tractors, is a perfect outside forward in the fields providing excellent traction even on difficult terrains, high flotation capacity and low rolling resistance for reduced fuel consumption and less emissions in the environment; Agrimax Sirio for towing heavy loads is the robust center forward able to keep the speed in the game (up to 70 km/h) even with heavy loads, paying at the same time great respect to the environment thanks to reduced rolling resistance which contributes to better fuel economy and less emissions.

Agrimax V-Flecto enriches the BKT Agrimax team with a new cutting-edge element and proves to be the winning choice for improving tractor performance on any field offering new models and sizes as response to specific farmer needs.

For SIMA 2017, BKT has chosen a completely new design for its stand that is more spacious than ever (well 459 square meters) to favor interaction with the public and better illustrate all new product features. The SIMA 2017 trade show is a prestigious gathering for operators from the entire globe. That is why BKT has chosen this backdrop to introduce the newcomer Agrimax V-Flecto to the public for the very first time. 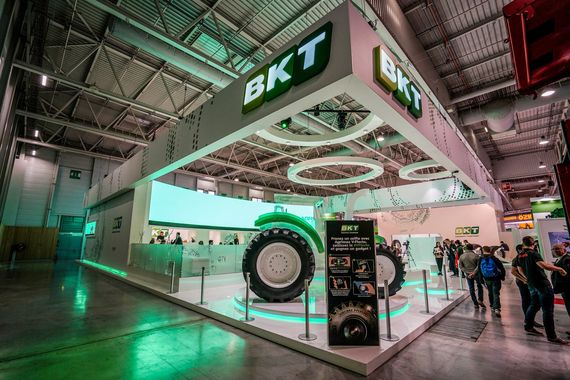 Once again, BKT’s trade show presence could not be overlooked thanks to the massive advertising campaign covering both outdoor and indoor spaces of the entire exhibition space at Paris. Always in line with its philosophy, not only does BKT present new products of its tire ranges, but also offers moments of entertainment along with social media activities. That is why, in addition to the traditional distribution of gadgets signed BKT, there were breathtaking moments with a real football freestyle champion: Iya Traoré, a footballer from Guinea and former Paris Saint Germain player, who has been entered as many as three times into the Guinness Book of Records. Traoré performed four times a day at the BKT stand and, after every show, thousands of BKT footballs (totally over 17,000) were offered for free to visitors.