Career development the focus of Campus & Career feature at Agritechnica 2017

While jobs in other sectors wane, careers in agriculture remain strong, thanks, in part, to the world’s growing population and our need to feed that population. Now in its third year, Campus & Career offers job seekers of all levels the opportunity to explore all that a career in agribusiness has to offer. The feature acts as a career orientation center, offering everything from training and skills building to education and technical research. Job seekers and mid-career professionals seeking new opportunity can visit Campus & Career in Hall 21 at Agritechnica 2017, which takes place from 12 to 18 November. 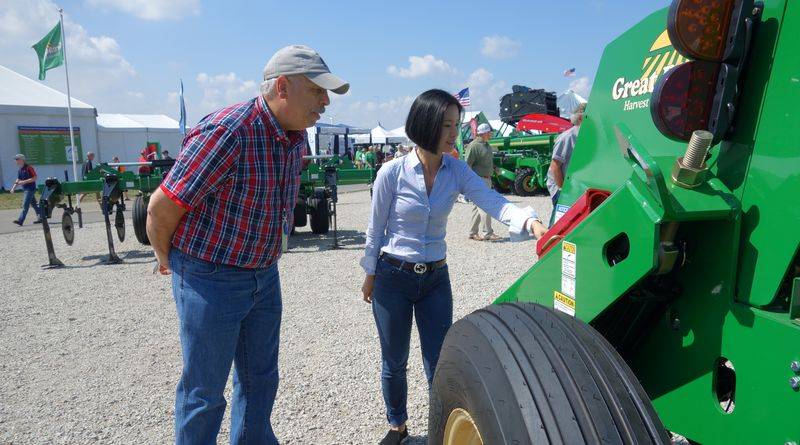 When Shiyan Zhang, territory manager at Great Plains Manufacturing, worked as an intern at DLG (German Agricultural Society and organizer of Agritechnica), Campus & Career didn’t exist. Instead, she built a successful agribusiness career by choosing a goal, developing the skills necessary to reach that goal, and by building and utilizing a strong professional network. Shiyan offers tips to prospective employees on how to make the most of their time at Agritechnica.

Find a niche. Choose a goal.

Like many students post-graduation, Shiyan found herself searching for new direction. She had just completed studies at the Fujian Agricultural University in Fuzhou, China, but wanted to pursue a Master’s degree in agribusiness. After careful consideration, she decided to continue her education abroad, choosing Germany as her next destination.

Shiyan says that before setting off on your career path it is important to know who you are and what you want. “Everything starts with you,” she said. “Set a goal for yourself, analyze the possibilities, and act on it.”

“I chose to go to Germany for studies based on reasons I think many aspiring students are drawn to Germany,” Shiyan said. “For its very strong international reputation for quality and innovation. I find these as important parameters for the Chinese agricultural industry, and aimed to be a part of helping German companies to penetrate and succeed in the Chinese market.”

Before beginning her studies, Shiyan spent one year intensively studying German. In 2004, she began her Master’s program at the University of Hohenheim, majoring in agribusiness. Her studies went well, and she graduated in 2006.

Build a network – and put it to use.

Just a few months after graduation, Shiyan took a six-month internship with the DLG, the German Agricultural Society and organizer of Agritechnica. There, she could really explore new opportunities in agribusiness. Part of her role as intern was to assist in the coordination of an agricultural exhibition in China. It was the ideal role for Shiyan, as it brought her one step closer to her goal of helping German companies gain access to the sometimes-tough Chinese market.

“At Agritechnica you have the opportunity to meet key decision makers,” Shiyan said. “The company managers are standing right there. Go and talk to them.”

Don’t wait for opportunity to knock; seize it.

During her six months with DLG, Shiyan built an impressive network. After completing her internship, she decided to use that network to gain employment. She reached out to company CEOs and asked if they needed assistance in establishing business in China. It was a bold move, but Shiyan knew she had to take risks to reap the rewards. Almost immediately, she received interest from Lemken, a leader in tillage, drill and spraying equipment.

“I think the key is being proactive,” Shiyan said. “Opportunities will not come looking for you.”

After welcoming her aboard in 2007, Shiyan worked as an export sales manager for Lemken GmbH in Alpen, Germany for two and a half years. The company was so impressed with her progress that they asked her to open an office in Beijing. In 2010, Shiyan opened the first Lemken office in China and went on to establish a highly successful dealership.

Following her success at Lemken, Shiyan was hired by Great Plains Manufacturing Inc. in Shanghai where she has worked as country sales manager since mid-2013.

Don’t be afraid of rejection.

Today, Shiyan attributes much of her success to her time at DLG where she says she learned a lot. Every step of the way, though, she says these tips also served her well. In closing, Shiyan offered one last piece of advice for those seeking employment in agribusiness: Don’t be afraid of rejection.

“I think back; if I hadn’t written emails to the CEOs maybe they would not have made decisions so quickly,” she said. “I was very happy and surprised every time I got an email from a company. Some of them rejected me, and it was no problem. If they gave me an answer, it was already a success.”