In cooperation with Kassel University, WEDA Dammann & Westerkamp, specialists for pig house equipment from Lutten, have developed a new kind of manipulable material for piglets and fattening pigs. By means of the rooting cones and pushing balls of bite-resistant and food-safe polyurethane, mounted to floor and brackets, the animals can act out their natural play instinct and can permanently busy themselves while standing up, sitting, or lying down.

Tested in various pig houses, the animals’ dealing with the cones has until now shown consistently positive results, in particular “reorientated“ behaviour patterns like tail-biting are reduced due to the satisfied rooting instinct. This is mainly relevant against the background of the fact that from 2016 onwards the prohibition of tail cropping will make its entry into German pig houses. 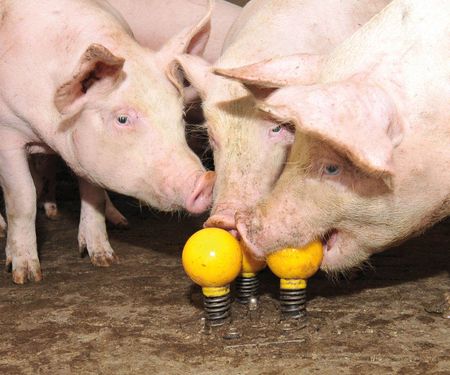 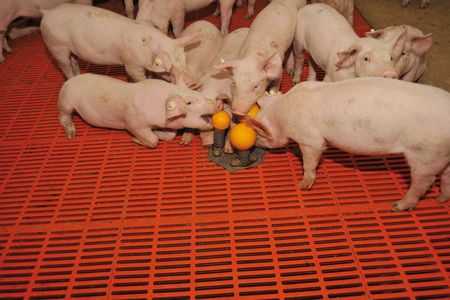 More wellbeing due to the rooting sensation: the rooting cones improve the animal wellness of fattening animals and piglets. The rooting

cones of bite-resistant and food-safe polyurethane, mounted to floor and brackets the animals are able to act out their play instinct.

Scientific findings also prove the practical suitability of the toys: in test groups with rooting cones, the animals used the cone significantly more frequently than the animal in the comparison group with the classical chain or ball. Consequently, the atmosphere in the rooting cone groups is clearly more tranquil than in the comparison groups, the result being that here, too, the injuries have clearly visibly declined. The results of this so-called “screening” (visible scratch marks) have been fully taken into account during product development.

The rooting cone improves animal wellbeing for piglets (60 mm diameter) and fattening animals (80 mm diameter). For this, the balls are mounted on a stable plastic ground plate with flexible metal springs. Fixed that way, the movements of the balls ensure variety and resistance so that the animals remain in the centre of the house and do not evade into the corners. 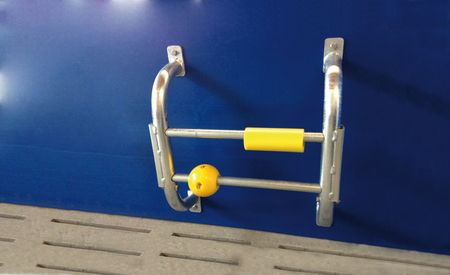 The rooting rod was designed for screw-fastening to already existing

pen walls. A modifiable PE pipe for the biting behaviour and a

pushing ball for the rooting behaviour can be attached here.

The pushing balls were developed in direct connection with the rooting cones. “We were well aware of the demand of pig farmers for suitable manipulable material, especially for the farrowing section and service station”, explains Ralf Meyer, WEDA’s development manager.

The pushing balls are available in ¾” and 1” and can be installed at the pipes of the farrowing cages or feeding/resting pens without the necessity to remove the equipment. “The acceptance of pig farmers for these toys does not least result from the hygiene properties and from a manufacturer-independent use of the low-noise balls”, adds Ralf Meyer.

The detailed results of the scientific study are shortly going to be published by WEDA Dammann & Westerkamp.